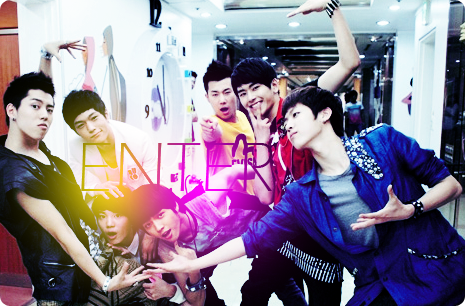 Once again, after very little convincing over a short period of time,

bloodtaki2 has once again succeeded in bringing me over to the dark side where the men are hot and the ships sail themselves, because after much hesitation over a long period of time, I have watched and finished Kuroko no Basket.

bloodtaki2, if you don't know, is like a drug dealer handing out free, drug-laced candy to grade school children, only eviller. I HOPE YOU'RE HAPPY, YOU FANDOM-WHORING, SLEEP STEALING WRETCH!

I fully believe that you can judge the level of a bands' popularity by the quality of their cover bands. Epsilon was this to Shinee (and a couple of other bands, but mostly Shinee) for me, and while I've seen a few groups doing Infinite's choreo that impressed me quite a bit, they just lacked a certain je ne sais quoi in terms of execution and synchronization.

This group has it in bucket loads. Bucket loads I tell you. Dance wise, I feel like they're almost on the same level as Infinite; in the case of certain members, better even and believe me, Infinite and I...we're like this, so it pains me to even say that. But I can't deny talent when I see it. On the other hand, all that talent is channeled into loving Infinite and worshiping the ground Infinite trods on (in a synchronized fashion) so who can really find fault in that? And they're hot to boot. SERIOUSLY WHO WOULD LOOK FOR FAULTS WHEN YOU HAVE THAT COMBINATION?

Seriously guys, the guy doing Sunggyu's part EVEN LOOKS LIKE SUNGGYU if Sunggyu was actually from Thailand (which is where I assume they're from since their YT and FB are in Thai) and their Hoya is seriously the most adorable thing ever, he's like not-dancing-adorable-Hoya WHILE dancing and not DANCING MACHINE HOYA when he's dancing (and he kind of looks like Amber too lol).

Their Sungjong looks like Ex-UKISS Alexander lol and idk but at certain angles their Dongwoo even looks like Dongwoo only taller and I swear he even thrusts like Dongwoo during Paradise. What am I saying, all of them are flawless and their Woohyun reminds me so much of someone but I just can't put my finger on it.

I feel so proud to have such an awesome group associated with my flawless, gorgeous angels.

And I just found a video of them fanboying Infinite during Infinite's fanmeeting in Thailand and they and Dongwoo and Sungyeol are so adorable I can't even rn. Their Hoya even wears glasses lol so damn adorable.

That said, when is Infinite coming to Malaysia? I would seriously DROP EVERY SINGLE THING I'M DOING TO GO. No lie.

First thing's first: Why is Infinitize not a full length song? Seriously, how could supposedly sane producers of the album listen to that intro and not go 'hmm, maybe this song should be a full length song because it's just that damn awesome'. That guitar riff in the beginning makes this whole album for me seriously. If I heard nothing else from this album it wouldn't matter because that was epic of epic proportions. An intro worthy of the Infinite name ♥♥♥♥

The first thing I thought when I listened to The Chaser: it's so happy. I don't know if it's shock from being overwhelmed by Infinitize, but my speaker is suddenly fritzing the fuck out so I can't appreciate the song as much as I want. But I still really like the beat of the song and the bridge reminds me so much of a song by some band that I can't put my finger on and it's frustrating me so much. I think it's Five but I'm not sure. The chorus sounds like it could be the OP/ED of an anime and honestly a majority of Japanese songs I listen to are anime OST's, so that's a compliment on my part. Overall, I really like the song, it isn't as epic on first listen as BTD or Paradise, but honestly I didn't expect it to be. It's still another awesome song by Infinite and I can't wait for the MV and to see it performed live ♥♥♥

LOL Feel So Bad is like Tic Toc 2.0. One thing I have to say about Infinite's songs, they always have extremely addictive beats and Feel So Bad is not different. Dongwoo's rap continues to be epic as fuck but no one is surprised ♥♥♥

That Years Summer is the hidden track from OTT right? For some reason I've never really properly listened to the song (due to the fact that I buy their CD's but never really PLAY the actual CD's 8D) so I'm not really familiar with it. As someone said once, it sounds like a Jason Mraz song. A feel good and laid back type of song--the type that I seldom listen to when it's by bands other than Infinite, but since it's Infinite I listen to it and actually kind of like it. It's really good song to listen to when driving and luckily I love to drive 8D ♥♥

I actually wrote something completely different about Only Tears earlier. I'm not a fan of ballads, I've never been and when I heard this song when it was released a few days ago, I thought it was super boring and I didn't like it at all. After I listened to it again earlier, I was still pretty meeeeh about it but I thought that the chorus was extremely beautiful and it suited Sunggyu's voice so much (as much as I LOVE hearing the others sing, I really think that this song should have been given to Sunggyu as a solo). Right now it's been almost 10 minutes since I finished listening to the songs and somehow this song is the one that left the biggest impression and the one I look forward to listening again the most ♥♥♥♥

I really like I Like You tbh. It's such an Infinite song and is super catchy and like That Years Summer, would make such a good and relaxing song to listen to while cruising down the road ♥♥♥

With isn't a bad song per-say, but they shouldn't have put it as the ending track especially after I Like You, it makes the song feel pretty underwhelming especially after such an upbeat song and because it isn't as memorable as Only Tears ♥

The truth is, after listening to the preview I had pretty low expectations for the album, but I'm glad to say that overall I'm pretty pleased with what I heard. Obviously it isn't their best, but I feel like they delivered the way I expected them to. I know a lot of people were underwhelmed by the album overall, but I really liked it. Maybe I'm just easy like that 8D

I have watched episode 6 of Shut Up! Flower Boy Band, had it exceed my expectations, loved it, Hyunsoo and Jihyuk a great deal and shipped the bromance all the way to Trinidad and Tobago (Timbuku was so last season).

So finally after approximately 43 hours with my insides skipping and my heart fluttering, I'm going to bed.

Is it not time for Shut Up! Flower Boy Band yet ;uuuuuuuuu; Seriously I haven't been this obsessed over one particular thing since the I stumbled across slash fiction for the very first time (it was a Harry/Draco one too).

I'm starting to get all sleepy but I need A BUCKET, a BIIIIG one to contain all the creys sure to come. I seriously have the crying section of Second Invasion on perpetual replay, especially Hoya and Myungsoo's parts. Speaking of Myungsoo, IS IT NOT TIME FOR SHUT UP! FLOWER BOY BAND YET?!

MY CREYS BE GONE WITH YOU ALL. BE GONE!

I spent the whole of last night and this morning sitting on a hard, flat cushion on the floor. Right now I literally have a pain in the ass.

I was almost uncharacteristically productive yesterday. I spent the whole day cleaning my room (there are still unfolded laundry strewn about and trousers hanging off the TV and a giant basket of manga's sitting like a pink elephant in the middle of my room) but if you know me irl, you'd agree that this is a big improvement even if it may not seem that way. And no, I'm not a slob by nature, I'm just...messily organized.

I repainted 1/4 of my room where the paint had been eaten away by the elements--added a couple of Infinite symbols here and there in the while--painted half my closet, then when I finished cooked pasta and potato salad for 8 adults, watched Shut Up! Flower Boy Band episode 5 unsubbed on Tudou, spilled a large amount of creys over Second Invasion and Dongwoo and Hoya and Myungsoo and their touching tears of happy mangst and nostalgic joy, then proceeded to coo over them a little bit more just for added effect, then trolled the SUFBB tag on Tumblr, started having immense amounts of FEELS for menacing-ice-prince Hyunsoo, stalked Infinite some more, made some new Dongwoo icons, had multiple epic win convos with

bloodtaki2 on FB about but not limited to a) Infinite b) Infinite c) Woohyun d) Infinite e) Second Invasion f)overwhelming amount of FEELS g)spilled gallons of creys over their perfection h)talked about how perfect Beast's Dongwoon is and if the stylist ever gave him a haircut that accentuated his dazzling perfection that he would not only be the Arab Prince, but also the prince of everything that is beautiful, holy and bishie-sparkling h)talked about Infinite some more.

This went on through the night and at about 9.30 am I slept for about an hour before I got up, stalked Infinite and Second Invasion and Shut Up! Flower Boy Band some more, had breakfast and said I'd continue with yesterday's room cleaning project, but surprise surprise, here I am again.

So there you have it folks, a guide to being a spazztastic Infinite stan who does actually have better things to do, but just prefers not to do it.

I'm bored, not even B.A.P's utterly amazing debut can really quench this gigantic hole in my soul I wish Infinite's going to have a bad ass comeback soon ;u;.
Collapse